Previous research has shown that plant litter moisture contents are highly correlated with microbial activity on leaf litter. Because of this, I have closely studied how plant litter takes up water vapor from the surrounding air. To do this, I created small chambers out of PVC that enclose a microbalance pan with plant litter on it, that also hold a container of either water or salt solution and an ibutton. This is tricky, as I needed to control the conditions of the chamber without touching the litter on the scale. 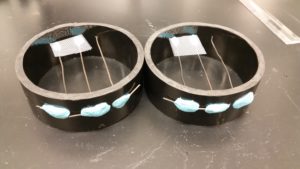 The barebones of my vapor accumulation chambers 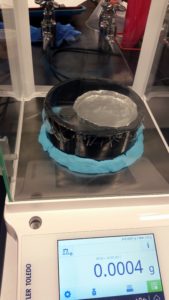 The vapor accumulation chamber installed on a scale. Notice the ibutton and pan of water inside the scale, covered with clear teflon tape.

Because I found that plant litter species have different water vapor sorption patterns, I then was curious what may cause the differences I observed. One hypothesis  I had, is that it may be possible that the wax concentrations on the leaf litter may affect how water diffuses into the litter. All plant leaves are covered with a cuticle, and imbedded in this cuticle are different amounts and types of wax. Wax on a leaf helps prevent water loss and can also protect from herbivory and scatter some harmful ultraviolet radiation. To determine the wax concentrations, I washed leaf litter with chloroform, and poured this rinsate into a bottle that I had previously weighed. 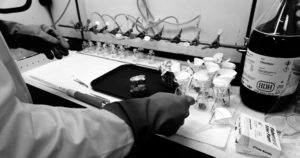 Washing the wax off of plant litter using chloroform

This research is being written up now for peer-review and will help to explain the differences we see in plant litter microbial respiration rates found in the literature, ultimately leading to a better understanding of plant litter decomposition.